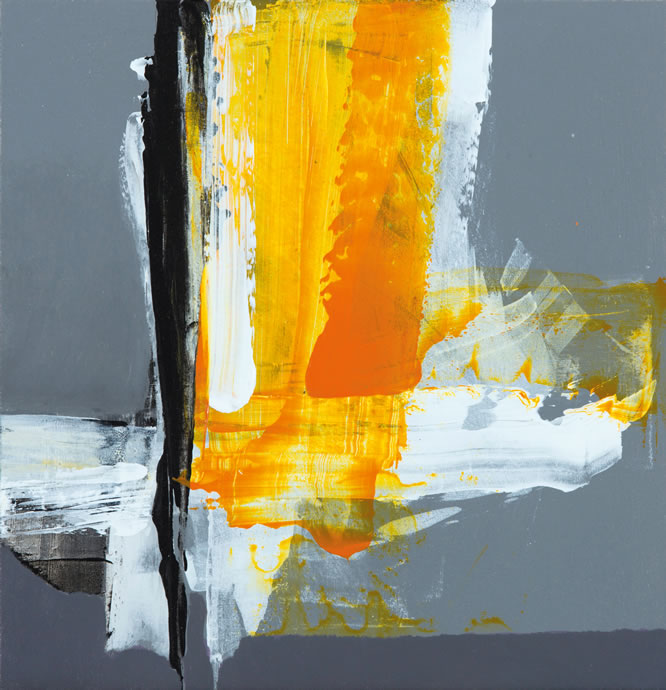 In the vibrant East meets West collection showcased in this exhibition – appropriately titled Fusion – Canning straddles the power and energy of both natural and man-made worlds, building a virtual bridge between them.

Neil Canning paints in a remote studio in rural West Cornwall, ancient province of rocky headlands, crashing waves and wild moors. The natural dramas played out daily where land meets sea and sky touches earth are an enduring inspiration for the bold and vivid abstracted works that bear his signature.

6,000 miles or so to the East, as the crow flies, lies the bustling city of Hong Kong, a unique and imposing waterfront metropolis. A stark contrast to his home surroundings, it’s a densely-populated architectural and cultural marvel that has cast a potent spell on Neil, and is now fuelling an intense free-flow of creative discovery.

Not only does Neil’s work delve deeper still into his relationship with the Cornwall he has embraced and explored over the past 18 years, it also offers a dynamic window on his richly-rewarding, recent sojourn in Hong Kong.

Drawn to the minimalism of oriental art since childhood, the act of removing himself from the familiar to experience such a fascinating land of contrasts has opened unexpected doors. He credits his trip to the city – originally a bid to expand international horizons – as a trigger for releasing self-imposed restrictions on his style and subject matter. It has prompted a fresh energy to inspire and permeate all his work, while the contrast has encouraged a new softness, particularly in his Cornish pieces.

His interpretations of Hong Kong, also informed by extensive reading about the city and its history, convey not only its vertical vistas, its harbour, its roads, its humidity and the fast-paced clamour of its daily life, they also tap into its rich Chinese culture – beautiful calligraphy, traditional ink paintings, junk ships parading their bright sails in the bay; tiny, red Buddhist temples punctuating the lines of giant skyscrapers. He even captures an element of still life in the intimacy of exquisite orchid blooms poised on a florist’s windowsill.

The first exciting raft of paintings from his trip were revealed a year ago to great acclaim. After stepping away from his studio last summer to relish the peace and beauty of his Cornish home and garden and replenish his energies, Neil plunged hungrily back inside in the autumn, to be swept along by a momentum that still isn’t spent.

The centrepiece of this collection is Neil’s largest canvas – 3m wide and 1.5m deep – simply called Hong Kong. Its imposing overview pulls the viewer into the spirit of a modern city with ancient foundations that would surely feel familiar to anyone who has ever crossed its threshold. The smaller paintings make an equally strong impact, steeped in intensity of colour and emotion.

Neil’s work deliberately transcends visual depiction. And he likens the physicality of moving paint freely around the canvas as a process akin to alchemy. Using layer upon hidden layer of colour and texture, his aim is to encompass the holistic spirit of a location or experience – the very personal sensations he carries away with him from a particular time and place… the light, the sounds, the smells, the tastes, the textures and the passions. He undoubtedly succeeds.

Like time capsules etched into his subconscious, unique sensory snapshots awaken as he concentrates on each image, reopening an amazing reconnection with both subject and moment. A concrete idea of outcome rarely produces satisfaction – he prefers to leave the seed suspended in mid-air.

“I think every painting should have a magic or a chemistry that makes it special,” says Neil. “Now I carry on, and carry on, until that happens.”